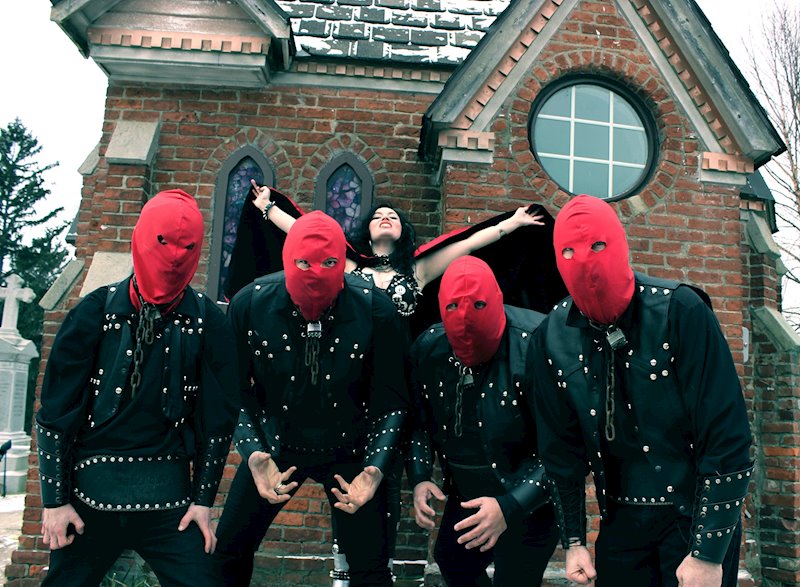 One of the most exciting and electrifying bands in today's occult heavy metal scene, for the past six years, SAVAGE MASTER have swiftly built an impressive canon of work over the course of two cult albums, one EP, one single, and especially their over-the-top live shows. The band was founded in 2013 by guitarist Adam Neal and vocalist Stacey Savage, so inspired by their love of heavy metal and horror. Soon enough, a mysterious spectacle was created, and it bore the name SAVAGE MASTER. From there, the band began their assured ascent through the underground, touring non-stop across North America and Europe, playing such festivals such as Keep It True, Hell Over Hammaburg, Legions of Metal, Frost and Fire, Ragnarokkr, Hells Heroes and many more, and now landing themselves an album deal with Shadow Kingdom Records. "Myth, Magic & Steel" album has been released, so this is a great chance for an interview with the band. Zippo tracks down vocalist Stacey Savage and he carries a bunch of very interesting questions. Lets take a look on the answers!

Album number three for Savage Master! You seem to be unstoppable. Tell us a few things about the writing process and the recordings. Do you follow pattern when you write stuff, or you combine spontaneous ideas?

Thank you! Usually Adam starts a riff, then comes up with an idea for the chorus and / or song title. From there he works out a rough. Then he and I split lyric writing duties. Larry writes his own solos. John adds his own flair to the drumming and sometimes from there we change small things before it’s completely finished. So in that there is kind of a routine but influences can come at any time so sometimes it varies.

The album doesn’t stray off your previous releases both aesthetically and musically. Do you think that this might lead to a satiety that might have an opposite effect in the band’s popularity, or there might be space for something different?

With each new album we are striving to improve and refine with the style and that also applies to our aesthetic. It’s all a natural progression that comes from wanting to make things better here and there.

The band seems to enjoy an ever-growing success. You have been working hard, yet the time is right, since the last decade nostalgia seem to have dominated the art world. Do you believe that you could have such opportunities even in the underground (label, promotion, gigs) if you played during the 90’s?

That’s really hard to say. I have heard several people say that 90s shows were generally better attended. But maybe that’s just a case of the “good old days” affecting perception. If it’s good hopefully people would like it no matter when it came out. There definitely have been a lot of awesome new traditional metal bands popping up lately. It’s really cool to see and to be a part of this new movement.

I really liked the album. It is plain and simple, catchy and enjoyable. I firmly believe that you sound more “European” than “American”. I traced influences in the early 80’s British scene (for example Grim Reaper, Blade Runner, Samurai) and in the central Europe scene (early Warlock, Acid, Crossfire). Do you agree with this statement? What are your influences?

That is true. A lot of our influences are European bands. We definitely were thinking about Acid and Warlock in our formation. We love Grim Reaper– and you are not the first person to draw that comparison. It makes us really proud and honored to be compared with such a great band!

Are you satisfied with your collaboration with Shadow Kingdom records? Would you sign to a bigger label if possible or you might think that this could create obligations (sales, touring, promotion) that could affect you as a band?

We are very happy with Shadow Kingdom records since we signed early this year. The goal is always to do what is best for the band. Right now, this is the best thing that has ever happened to us.

A couple of years ago I read an interview from a well known “underground” band. The band stated that they didn’t want to draw “unwanted attention” implying that they’d rather remain in the underground even if it was a forced career movement rather than join a mainstream roster. I found this statement false: cult bands became cult because the mainstream audience wasn’t interested about them, not because they struggled to be addressed to an elite audience. What is your point of view on this?

Our goal is to spread our music as far and wide as possible. Heavy metal can conquer the world! We want people to listen to our music and to watch us live. We have no one to hide from.

What I really like on Savage Master is that apart from the music you pay attention to the aesthetics. I love it when bands do that. What were your inspirations for the aesthetic part? I truly believe that the 80’s band Acid and Witchfinder General could be some of them? How did the stage show grow throughout the years? Do you plan on investing more on the stage show?

You are spot on. Definitely Acid and Witchfinder General are big ones. We also think a lot about W.A.S.P., Alice Cooper, Screaming Lord Sutch, KISS, Dio, Manowar and others. We like a lot of bands that put on cool shows. I don’t want to spoil any surprises of our live show for our fans, so they’ll just have to catch us live or see a video of us to find out. And yes, we always plan on improving our show. It wouldn’t be as fun if it was always the same.

I also love your cover art. You seem to pay attention to this. I find them inspired by 50s-60s and 70s supernatural occult horror flicks like Hammer movies. Do you watch such films and if you do which is your favorite? Also, the video you did for the title track, was quite trashy but in a very enjoyable way? Whose idea was it?

Thank you! Our first two album covers and EP and 7” were done by Christophe Moyen. We really love what he accomplished with those covers. Our most recent cover was by Mike Hoffman. We do love old horror films. As you may have guessed a favorite is Mario Bava’s “Black Sunday”. Adam was the mastermind behind the music video for “Myth, Magic and Steel”. We had a blast filming it. We were fortunate enough to have “Truth or Dare (1986)” film director Tim Ritter on board.

Kentucky isn’t famous for its metal bands apart from the legendary Lethal. Are there any other bands worth mentioning? Do you have any bands that you love to play or might want to play live with?

Blood Curse, Black Knife, and Stonecutters are all pretty well known active bands from Kentucky. There are so many bands we have played with over the years that we never thought we would share the stage with to name a few Manilla Road, Angel Witch, Ross the Boss, Exciter, Diamond Head, Cirith Ungol, Grim Reaper, Bitch…. We hope one day to add to that list all of the following: Judas Priest, Iron Maiden, King Diamond, and Coven.

During the last years there has been a turn of the tables as far as women in metal are concerned. Lots of bands seem to prefer female vocalists and more and more women are involved with metal seriously. Not only that, but recent civil movements like #metoo and modern feminism have brought women to the public attention. I firmly believe that it is very positive, yet sometimes I can’t help thinking that the music industry exploits this (forced attention etch) in order to gain more and more $$$$. What is your opinion on this?

There definitely has been an uprising of strong and talented female performers and support for them. Although women have always been in metal but just werent as accepted in the past. People who are mostly concerned with making money will always promote whatever they think will sell best.

You have been recording almost each year since 2014. Three full lengths and two ep’s while the scene is saturated with lots of new releases each week. Do you think that this is too much for a fan who must pay lots of money to buy all that stuff?

The scene is definitely saturated. But our focus is on making music that we care about and hopefully others will like too, not music that pollutes the scene. We don’t expect every fan to buy every release, rather it is really exciting to see it when you do have that super fan who does want to collect every release. Most importantly, we just want fans to enjoy the music and the show.

Do you have any plans for live shows or a tour?

We are touring for the last 5 days of December with Gwar. We love being on the road!

Last question: how do you imagine the band in ten years? Would you like to be around, famous or not etch!

I hope we are still making albums, touring and meeting new fans. Hopefully we will make it to Japan by then… or the moon! Thank you for the interview, Zippo!