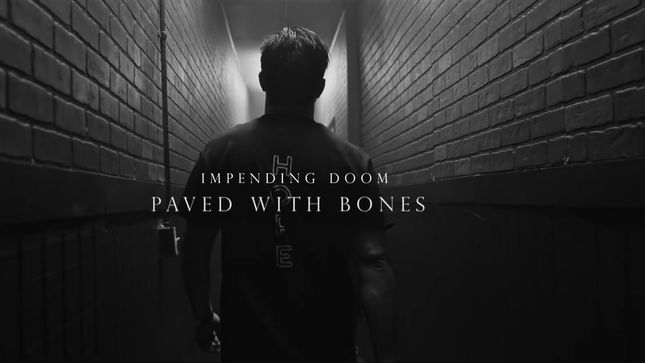 California metal veterans Impending Doom have released a music video for the track “Paved With Bones” The video was directed by J.D. Butler and shot at the band’s recent sold-out album release show at Chain Reaction in Anaheim, CA.

The band comments: “We wanted to have an event in our hometown where fans could come to the show early, hear our entire new record before the rest of the world does, and shoot a music video. Chain Reaction was the perfect place, it’s where we all grew up playing and makes for an intense show with being all crammed into a somewhat small space and getting rowdy with our fans!“

Impending Doom released their sixth studio LP called The Sin And Doom Vol. II on June 22nd via Entertainment One. Order here. The album sold 4,300 copies its first week of release and debuted at #116 on the Billboard Top 200 Chart.

Impending Doom commissioned artist Colin Marks (Fleshgod Apocalypse, Whitechapel) to do the cover art for the latest release. Marks had also done the artwork for The Serpent Servant (2009)

“The Wretched And Godless”:

December 26, 2018
The official music video for the song "Forest Through The Trees" from former ACCEPT and BONFIRE singer David Reece can be seen below. The...