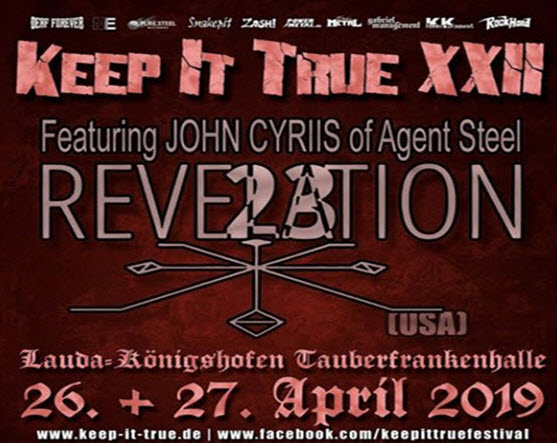 As announced by Keep It True promoters, Ritual (UK) have cancelled their appearance on the forthcoming Keep It True festival 2019: “Dear Mr.Weinsheimer, my apologies for not contacting you sooner,but i have been away on business matters. I was only informed of your festival booking offer to my client Gypsy Re Bethe, yesterday on my return.

It is standard practice as you know,that all arrangments and bookings, have to be approved by me.This is my legal obilgation to all artistes, contracted to our agency. I do not represent the act “Ritual” who, to my knowledge, ceased to be active in 1996. And for the purpose of a live appearance, it would be a one off “reunion” of the members,not an ongoing concern from that event.

However,the founder member,of that act, Gypsy Re Bethe is contracted to our company under personal management. He is one of our most accomplished,and valued solo performers. Gypsy Re Bethe is now 66,and has recently had health issues,and although now well recovered,has been advised to restrict travelling and stay in the UK, for the immediate future. Thorsten at High Roller Records will confirm this,as he recently bought all the rights to Ritual albums, from Gypsy Re Bethe during his illness.

I had no part in this arrangement, only to read and approve the contract. Therefore regretfully, i am unable to release this particular artiste, from his contractual obilgations due to pending arrangements, at this time. The KIT festival dates,unfortunately clashes with, the planned filming, for a UK TV BBC documentary which includes Gypsy Re Bethe,i am sure you will understand,this as a priority. Gypsy Re Bethe has been informed of my decision today. I wish you much success with the KIT festival,and hope you find a suitable replacement act. regards Max Bernstein.”