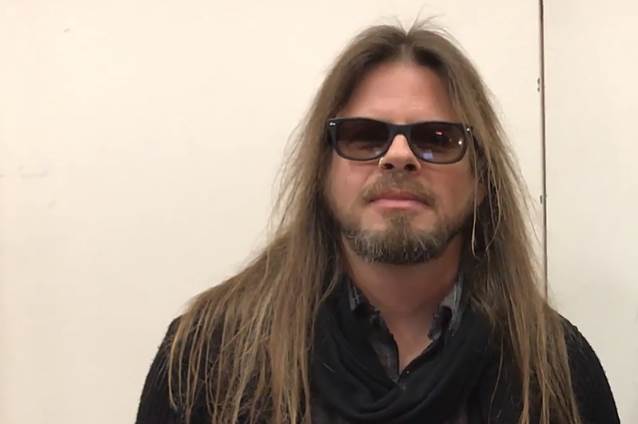 QUEENSRŸCHE singer Todd La Torre has revealed in a new interview that the band’s long-awaited follow-up to 2015’s “Condition Hüman” album is “done” and is due in early 2019.

Earlier this year, QUEENSRŸCHE entered the studio with producer Chris “Zeuss” Harris to begin recording its new disc. Todd spoke about the album’s musical direction with Eclectic Arts, saying (see video below): “I love it. It’s a lot of fun. I’ve been listening to it constantly. I think that it’s got more driving songs on this record than the last one.

“I remember the last one, when we were doing the track listing, it was, like, ‘Okay, we need another fast song,'” he continued. “And we were, like, ‘Oh, we don’t have one.’ So there weren’t as many fast-paced songs as we would have wanted, but we just kind of wrote songs and it was what it was. But this album has, I think, more driving songs. I think there’s elements that are more progressive — some different time signatures. It’s a good-flowing album. We’ve been experimenting with some track listings, and so far, we’re all really happy with the direction that this album took. And I can’t wait for people to hear it.”

Asked what other differences fans can expect to hear on QUEENSRŸCHE‘s next album compared to its predecessor, Todd said: “There’s some slow, kind of haunting, creepy, cool stuff on this record. Like I say, there’s more progressive elements on this one, I think — certainly more, I think, than the last one. The song ‘Condition Hüman’ was kind of progressive in QUEENSRŸCHE‘s standards, so there’s kind of some of those elements going on. Really good lyrical content — thought-provoking stuff. Certainly never trying to tell anyone what to think, but to think. Again, a lot of it deals with things that are happening in the world that everyone can identify with and relate to. I tried to have some really good vocal acrobatics on this [album]. There’s not a ton of high singing, but there’s some high stuff on there vocally. I mean, it just sounds like a great QUEENSRŸCHE album to me. But you never know until you put it out to everyone, and then it’s not yours anymore.”

Todd also addressed the fact that it’s been almost three years since the release of “Condition Hüman”, with fans having to wait another few months before the arrival of the new studio album.

“We’ve had a long time since the last release, and so when you’re touring all the time, you’re, like, ‘Gosh! Six months has gone by. How much further are we?'” he said. “‘Cause when you go home for a few days, sometimes you don’t wanna even do music — you just wanna do normal things, like cut your grass and go to a movie with your wife or just lay on your couch and watch TV and just decompress. So sometimes I’ll be home for four or five days and I know I have music to do and I just don’t feel like doing it, because you just need to step away and give your ears a break.”

Despite the long wait, Todd believes that QUEENSRŸCHE‘s next effort will more than live up to fans’ expectations.

“At first, when you have the demos, you’re, like, ‘That’s a good one. And this one, it’s okay,'” he said. “Now when we listen to everything we’ve done, there’s not a bad song on it — there’s not a filler song on it. To me, every song is just as good in its own way.”

At the moment, QUEENSRŸCHE is putting “the finishing touches” on the new album, according to La Torre. “I have one more vocal thing to finish, but that’s a not a big deal, ’cause he’s still mixing things and creating some, we like to call it, ear candy, some ambient sounds in the backgrounds on some songs and those kinds of things,” he said. “But for the most part, the record itself is done.”

As for a possible release date for QUEENSRŸCHE‘s new disc, Todd said: “We’ve had conversations with management. We were shooting for, like, an October-ish release — September or October. But then we didn’t have bonus content for… I think the label wanted some bonus stuff for deluxe packages and some extra stuff for people. And so we were, like, ‘Okay. What are we gonna do now? We already have our songs for the album.’ We weren’t really planning on doing bonus stuff. So we have agreed to do some bonus stuff. And so that’s the one thing that I have to finish vocally. There’s a few bonus tracks that we’re gonna be having, so that pushed the release a little bit further. And we’re gonna be doing some video shooting within the next couple of months, I believe. So I think that it’s gonna be probably coming out February, mid-February. Yeah, yeah, February. So we’re still locking in the exact date, but the last conversation we had, it seemed like, you know what? Let’s just make sure everything’s right — the artwork, the packaging. That stuff takes a lot of time to get right. And what’s a couple of more months, really? We don’t wanna sacrifice quality just to get it out the end of the year versus a couple of months later.”

Todd also revealed that QUEENSRŸCHE will be “doing a lot of touring next year” and will cover a lot more territory than it did so far in 2018. “This year was a lot of ‘fly’ dates,” he said. “We didn’t do any ground touring, per se. We do have some shows with the SCORPIONS [coming up], and a couple of our own, so we’ll have a bus and we’ll do that. But most of the year has been fly-in-and-out kind of stuff. We didn’t go to Europe this year. So we’re kind of [playing] enough [shows] to work and live and do what we need to do, but kind of pulling away a little bit, focusing on this record, and then next year we’ll probably hit it pretty hard.”

For the past 14 months, drummer Scott Rockenfield has been taking time off from QUEENSRŸCHE‘s touring activities to spend time with his young son, who was born more than a year ago. Filling in for him is former KAMELOT drummer Casey Grillo. However, QUEENSRŸCHE has not yet indicated if Rockenfield was involved with the making of the disc, although it did confirm that Grillo did not play on the record.

QUEENSRŸCHE‘s next effort which will mark third full-length release with La Torre, following the departure of singer Geoff Tate in 2012.