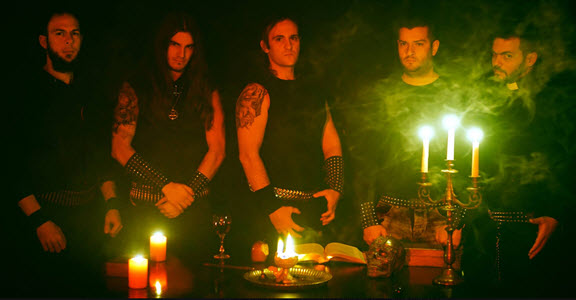 SABOTER posted the following announcement on their facebook wall:

Αfter a short period of silence, the cult of SABOTER is back. We are more than thrilled to reveal the title, tracklist and cover artwork of our second album, an aural horror of merciless sinister metal.

“Architects of Evil” is going to be released on November 16th 2018 by No Remorse Records. The script of the cult and the sinister rites are unveiled and spread like a plague upon the world:

“Once again… the mystic doors of magic and might are open from the inside for us. We have travelled far from the darkest seas to reveal the cyclopean gates of R’lyeh.

Then, as we sail from the Aegean Sea towards the ice of the mother north we stand on Neda River to wash our tears.

We drink nectar with the Roman lions.

We speak to the ravens and meet the four thousand strong who dare to raid the golden walls of heaven.

Victorious we march upon a million souls and under their women’s cries we nail their priests on the cross.

We are the last Ceasars with our scepters and we seek the ancient wisdom of the owls.

As messengers, we speak the truth for the Smyllun park orphanage tortured children souls to the mountain of the gods.

The trip never ends though… as we bring you these three words of ecstasy and power that no one can give you except our war cult.

MERCILESS! As we bring to our enemies an all-out war.
SINISTER! As we deliver the dark magic against the world.
ALMIGHTY! As we conquer all forms of life and futile resistance against our mighty will.

We own the divine right to sit on the thrones of the dead kings.

OPEN THE GATES! RAISE YOUR SWORDS! TO GLORY WE MARCH!

“Architects of Evil” consists of 7 Chapters of Relentlessness:

June 1, 2018
SILENT WINTER, power metal band from Greece, announced they'll be releasing their mini CD call "The War Is Here" later this month. They teased the...