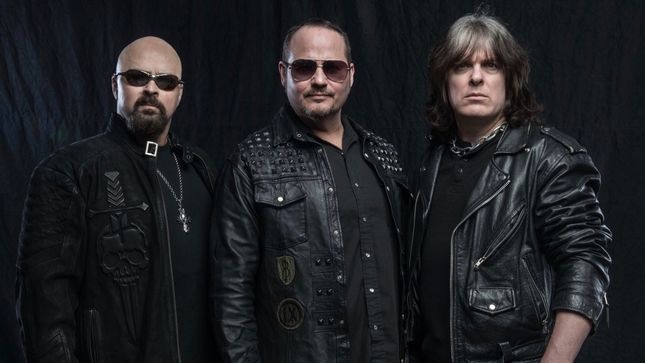 The Three Tremors – the new supergroup featuring Tim “Ripper” Owens from Judas Priest, Iced Earth and many others, Harry “The Tyrant” Conklin from underground legends Jag Panzer, and Sean “The Hell Destroyer” Peck from Cage, Death Dealer and Denner/Shermann – will release their self-titled debut album this winter.

They have released a teaser for their next lyric video, for the song “When The Last Scream Fades“. Check it out below.

When asked about the rights to use The Three Tremors moniker, Tim “Ripper” Owens states: “It was talked about being done before by Halford, Tate and Bruce but nothing was ever being done. The name was not even taken or registered so now we own the name. Sean registered it.”

Sean Peck adds: “It was an urban legend and it would have been great if the original guys Rob Halford, Geoff Tate and Bruce Dickinson would have done it. So I was sitting there thinking if they are not going to do it, then I want to do it with two of the best guys that I can think of in metal and put out a power house record. We have been working on this in secrecy for five years. It’s like resurrecting the idea that but actually doing it.”

BraveWords recently premiered the first lyric video, “Invaders From The Sky”, from the upcoming debut album.

Owens: “There is a lot going on in this song. This is three singers bringing it old school with power and highs!  To tell you the truth this is what you are going to get on the whole CD!”

Conklin: “I would have to say this is one of the more thrashy tracks on album.  It has a real chaotic feel too it which I love.  I think we are opening the live set with this one too, it’s going to be crazy doing this one live.”

Peck: “Trying to pick which songs to do videos for was almost impossible.  All 12 songs on this record are so strong that I have a new favorite each time I listen to it.  We decided to pick ‘Invaders From The Sky’ for one of our videos because the whole imagery of an alien invasion we thought would look killer underneath the ferocity of the music.  Hats off to the guys at GHD who did an incredible job putting it together and making it look just how we wanted it. When the album hits in a couple of months everyone will sympathize with how hard it was to single out just which songs to do videos for.  Everyone has a different favourite!”

The Three Tremors nourish in heavy metal anthems, and feature the illustrious chops of guitarist Dave Conan Garcia, whose tenacity fuels the fire, allowing the music to naturally flow in complimentary tone. Second guitarist Casey Trask picks up the pace and pushes the boundaries alongside bassist Alex Pickard, who highlights a melodic sensibility giving character to the overall tonality. On drums, the thrash machine Sean Elg adds in his perfectly placed fills and signature double bass patterns.

The Three Tremors self-titled debut album will feature 12 new songs that depict monumental stories of time honored heavy metal themes as written by Sean “The Hell Destroyer” Peck, focusing on original concepts to highlight three of the most revered and relentless voices in heavy metal.

The Three Tremors will court you in to an entirely new atmosphere unlike any group before! Prepare for the most thrilling heavy metal record to date!

Read more at their Pledge Music page here. The The Three Tremors debut is due out this winter.

The The Three Tremors tracklisting:

European tour dates have been announced for September / October 2018. The complete itinerary can be found here.

May 8, 2018
LEVIATHAN, progressive metalers from Colorado, USA, released the video clip for "Mercy Kill Liberty", taken from the recent album "Can't be Seen by Looking; Blurring...