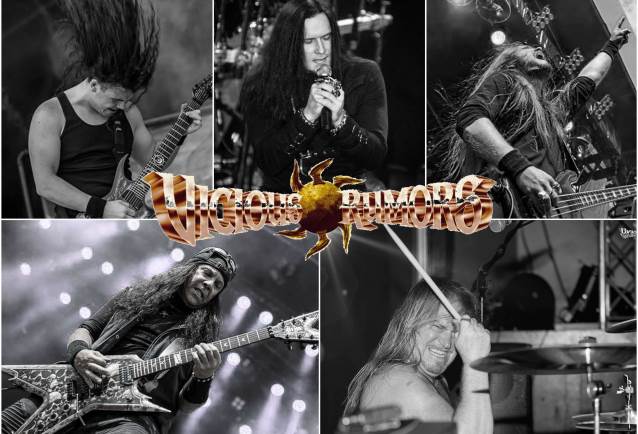 San Francisco Bay Area metallers VICIOUS RUMORS have announced the addition of vocalist Nick Courtney to the group’s ranks. Courtney joins the veteran band for the upcoming 46-date “Digital Dictator 30th-Anniversary Tour” of North America and Canada, which will take place from August 31 to October 20.

Due to the massive size of the U.S. tour, the band will bring the “Digital Dictator” trek to Europe in April 2019, where one show is confirmed already: April 13 in Mannheim, Germany at the Delta Metal Meeting.

Nick adds power, style and dedication back to the band. Guitarist Geoff Thorpe says: “Nickhas a real kick-ass aproach! We’re ready to tear it up on tour with his powerful and melodic voice.”

At 30 years old, Nick comes from Vancouver, Washington, bringing a new fire and energy to the VICIOUS RUMORS camp. He was am “American Idol” contestant who stood his ground singing JUDAS PRIEST and IRON MAIDEN at his audition… one of the very few metal singers to ever make the second round on the show!

Former singer Brian Allen recomended Nick to the band as schedule and direction conflicts led to his departure.

VICIOUS RUMORS‘ previously announced special-edition DVD is now titled “40th Anniversary – Live in Germany” and has a also new cover. The DVD of last year’s crushing show at the Bang Your Head!!! festival in Germany will be available directly from the band starting August 31 at the first show of the tour in Santa Rosa, California at the University of Rock. The DVD will be available only at the shows and online through the VICIOUS RUMORSsocial media sites.

In other news, VICIOUS RUMORS has just re-signed with SPV/Steamhammer for two more studio albums. Thorpe says: “We’re so excited to continue with the incredible team at SPV/Steamhammer. We’re honored to move forward and be part of the great family and history!”

Olly Hahn, head of SPV/Steamhammer, adds: “Geoff and the band are real fighters and legends when it comes to U.S. metal. Looking forward to a new crushing metal album… the ball is rolling again!”

VICIOUS RUMORS is already in pre-production on new material and is planning to release the next album in the summer of 2019.