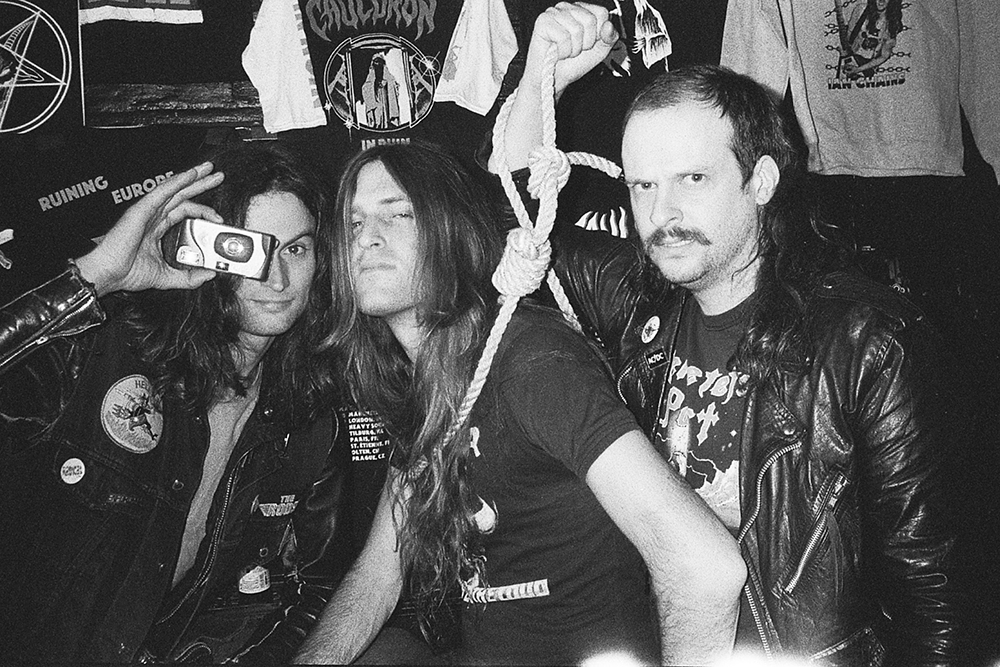 Formed about a decade ago, CAULDRON have been on track and consistently delivering albums ever since. They breath for Heavy Metal, something you can easily tell by their looks, sound and overall aesthetics. After a devastating accident threw them off the wagon, the band got back on track and recently delivered their fifth album, "New Gods". Ian Chains (guitar) was kind enough to spend some of his time answering our questions. Check it out...

Hey folks, thank you for taking the time to do this interview. How’s life treating you lately? Is everything OK after that crazy accident of yours?

Thanks for getting in touch! Oh yeah, things have been pretty good lately. Everything’s pretty much returned to normal after the accident.

If not mistaken, that was right after the release of “In Ruin”, right? In brief, what impact did this have on the band’s live? Hope didn’t throw you off the rails for too long…

Yeah “In Ruin” came out in January 2016 and we flipped our van over a month and a half later. It kept us on hiatus for quite a while, but we still managed to work on new songs so fortunately it only took us 2 and a half years to get another album out.

You released a 7” of covers about a year after that [“In Ruin”]. What prompted you to do so and why these two covers in particular? Had you started working on new material for “New Gods” at that time?

We had already recorded those covers (RAZOR‘s “Take This Torch” and VENOM‘s “Die Hard”) using some spare studio time from the “In Ruin” sessions, so figured we’d release them to keep the band momentum going because we knew we’d be out of commission for a while. Some of the material for “New Gods” had starting coming together even before “In Ruin” was released so we never really stopped writing.

“New Gods”. Is there a special meaning behind the title and cover art? The art depicts some kind of thorny creature… what is it? Who’s the artist?

“New Gods” to us is a reference to all the negative stuff that’s happened to us within the past 2 years, and trying to get over it. So much has changed that we feel like we have a different outlook on things now, hence “New Gods”.

In my mind the art represents a visual representation of depression, anxiety, loss, pain etc. It struck me immediately when I first saw it and left me feeling uneasy. The artist is Robin Ouelette who is also the singer in my other band CHAINBREAKER. I was over at his place and he must have been moving some paintings around, which he has plenty of, and it was sitting out and caught my eye. He painted it back in the early 90’s so it’s been around for a while, although no one’s ever seen it until now! I asked him if we could use it and he said yes, so there you have it.

Moving on to the music, it seems you took a slightly different approach on songwriting. There’s more “ambiance” and mid-tempo speeds compared to your earlier works, and the aggressiveness seems to gone. Would you like to share a few words about this “change”?

It’s just a reflection of what kind of stuff we were listening to at the time we wrote the songs. There was lots of new wave and AOR being spun around that time. We’ve always been a very mid-paced band. We can leave the speed metal to the kids who want to play that stuff. I think we’ve developed our own style and it’s definitely not portrayed by speed.

On a personal note, “New Gods” sounds a bit darker compared to previous works and feels like an “introvert” (or personal) album to me. Did the accident play a role in this?

That’s true, the lyrics are quite a bit darker this time around. The accident did play a role in that, but there was more stuff to follow. The accident was the beginning of a good 2 years of negativity.

For the Heavy Metal Historian of the future, can you share a few things about the recordings/production of the album

We started recording this one in September 2017 into November at Union Sound in Toronto.

Our friend Chris Stringer who recorded and co-produced the last album was given full reign of the production this time around. It’s good to have someone outside the band suggest things to get the best sounds and performances out of us, and I think it’s quite obvious that he made a pretty big difference when you compare this album to “In Ruin”.

It’s always bad when guys within the band are telling each other how to play a part. It’s much better to have a guy whose job it is to do that so that every runs smoothly and there are no hard feelings.

What comes after the release? Are there any planned shows/tours either later this or the upcoming year?

We just played 4 release shows (Boston, Philly, NY and Toronto) and we leave for our European tour tomorrow. We don’t have any plans for 2019 but who knows…

To us it’s the definitive Cauldron album. It’s the one we can live with the most. It’s got a good balance of melancholy and uplifting AOR sounds.

Lately we’ve witnessed the NWOTHM scene blooming. Lots of fans and bands return to the “classic” metal sound. Why do you think this is happening?

Classic bare bones metal is where it all started. It’s timeless so it’s no surprise people keep coming back to it.

Apart from fans and bands, labels also seem to be onboard with this change. From a listener/collector standpoint, what do you think about all the releases and reissues on vinyl, cassettes, etc?

Oh yeah, well labels were all hyped up on “NWOTHM” in 2008/2009, and then when they realized there was no money in it they moved on. I guess they’re giving it another chance? For me, if a reissue is done faithfully enough and isn’t a gatefold 180 gram double LP then I’m ok with it. Vinyl culture is pretty tacky to me. I don’t care about getting a neon green record. Black vinyl or nothing! As far as cassette’s go, whatever they’re fine, but they’re too expensive. I’m not paying $12 for a cassette!

Do you think the medium/music format is that important after all?

Well obviously listening to an album on vinyl compared to Spotify makes a huge difference. If I like an album I’m going to buy the physical copy. But honestly, if people are listening to the album at all, I don’t care what format they do it on.

You’re metal musicians, but above all, you’re heavy metal fans. How does it feel to walk the path your idols did before you?

Well I don’t know if we’re exactly walking the same path as our idols. We just do this because we’re fans of music first and foremost. If we get to bump into Angel Witch or Exciter here and there then it’s just a bonus for us.

Any cool music you listened recently or any suggestions for our readers?

That’s all on my end. Thank you once again and best of luck to you and “New Gods”! Cheers!

Thank you and take it easy!

April 17, 2021
In case you missed it, ACHELOUS are home straight in releasing their new album entitled "The Icewind Chronicles" and inspired by the “Icewind Dale”...

January 6, 2013
Corsair from Charlottesville, Virginia, US have their latest release on Shadow Kingdom Records. A fantastic full length of Heavy / Progressive Rock including inspired music that will travel the listener to the land of melody. Well to cut a long story sort, Corsair is a band for sure not to be missed. So here is an interview with them, for those who do not know them and for those who want to learn them better. Enjoy!