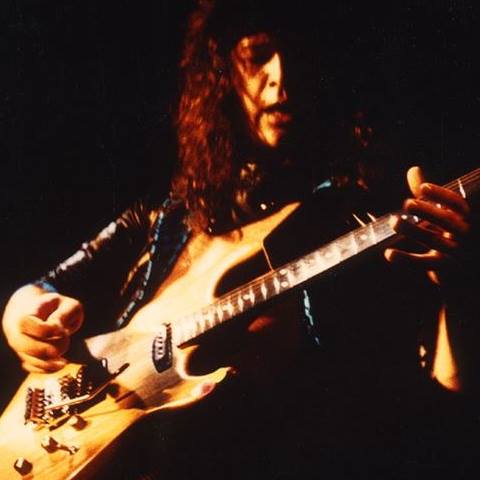 Heir Apparent mastermind, guitarist Terry Gorle give his final interview before the band's strike in Europe for the special Graceful Inheritance tour. He clears up all the details about the tour's final line up, he gives us the latest info about the debut album re-issue, he talks about Steve Benito and he sends a special message to all the Cyprus fans of Heir Apparent. Enjoy.

Hello Terry it is nice talking to you again. Hope everything is well.

Well it seems that we got real big news around the band. How this re union thing started?

This has really been a huge surprise.  It started first with a request from Ray contacting me through MySpace last spring.  Then, I created a Facebook page in August, which put me back in contact with Paul and Derek. The tour was created from the great response I received within a week of letting a couple people in Europe know that all the guys in the original lineup were thinking about doing some shows if anyone wanted to see us.

When was the last time you spoke with the band members of this line up?

Paul Davidson was supposed to be a part of the re union tour with the original debut album line up but finally he is not. what happened?

After the original  tour plans were made, Paul revealed that he was unable to obtain a passport because he owes $6600 for child support. The degree that Paul is delinquent in his payments is a federal crime. I made numerous attempts to find solutions and generate money to loan Paul so he could pay the debt and get his passport. Ultimately, when it became time for Paul to take responsibility for his debt and make a commitment to repay the loan as a priority to move his life forward, he was not willing to make that decision.

Who is replacing Paul finally? How did you find him? Is he going to be a full member or just a member for this tour?

Immediately after Paul quit, Bryan Hagan volunteered to step in and allow us to continue with our plans. Unfortunately, Bryan has never owned a passport, and the process for him was not coming together in time. After three weeks had passed, we were forced once again to make an immediate change. The promoters needed to buy tickets, and the airfare prices increased dramatically after the beginning of the year. We needed to find a singer who already had a passport or be faced with canceling the tour in the first week of January. We have taken this opportunity to find the best possible vocalist under these circumstances. The new singer is Jeff Carrell. Jeff has worked with Ray and Derek in the past. Jeff has also written songs for Geoff Tate’s solo album and Queensryche. So, we literally have had one week for Jeff to learn 15 songs. This is an almost impossible task and Jeff has been remarkable with how quickly he is learning. The immediate goal is to focus on the upcoming tour shows. I don’t know if these players will continue onward.  I want to record new music, and I will continue to look for a vocalist who has the talent and the commitment to do the real work necessary to make something worthwhile.  It is relatively easy to find people who can copy music for gigs when compared to finding players who have their own motivation for creativity and the discipline to stay focused on a long term goal.  It will take dedicated players to create something special to meet the expectations of the fans.

The rest of the line up would be from the debut album era. Right?

Yes. Derek Peace on bass, Ray Schwartz on drums, and me.

All those changes affected the tour plan in a way….

Yes, unfortunately the show in Nicosia Cyprus was canceled and there were changes in the dates of our shows in Greece. So for now the first show would be at Athens-Greece on January 12, next one at Thessaloniki-Greece on January 13 and finally at the Posthalle in Würzburg Germany, playing the Metal Assault II Festival, on January 14.

Well there were some people were afraid that the all European shows would be canceled?

They were canceled… I canceled them on November 28 when solving Paul’s problem seemed impossible.  Then, Oliver provided an option that I spent a couple more weeks working on to keep Paul in the picture.  Everything was back on track for a short time.  Again, when the time came for Paul to make a commitment to repay his debt, he decided it was easier for him to quit.  By the second week in December so much was invested into having Heir Apparent at the shows that it became more important to find a replacement than to cancel.

I just want them to know I am very sorry that the circumstances we faced forced us to cancel the concert in Nicosia.  It was originally cancelled weeks ago because of a lack of communication between promoters.  Then, suddenly it was rescheduled again.  This time, the cancellation was entirely a matter of economics.  We were unable to provide a passport number for Bryan Hagan to book the flights before the airfare rose 2000 Euros because we were within one week of the original departure date for the Cyprus show.  To avoid cancellation of the entire tour, we were not only forced to cancel Cyprus, but to find a new vocalist with extremely short notice and prep time for the remaining shows.  We also lost a day to recuperate from the jet lag…  we will now be flying directly to Athens to perform January 12…  no sleep for 36 hours…  Several factors have made the timing of this January mini-tour less than ideal.  Ultimately, to have the involvement of the original members put us in a situation of now or never.

Ιs there a chance for Paul to return and sing for HA in the near future?

Anything is possible, but it is not likely.  It is up to Paul to prove that he can take control of his life, and then prove that he is the best choice for moving forward.  Whether or not he sings for anyone again, I hope he gets back on his feet.

There is a special re issue of the debut CD. Can you give some more info?

The Graceful Inheritance CD will be reissued in a 1000 unit limited edition two-disc package that will include the 1984 5-song EP along with our 1985 performance at Eastern Washington University for their LiveTime TV show on DVD.  There will be a booklet that will include unpublished photos from the early years, dating from 1979 to early 1987.  Most people don’t realize that Paul Davidson and I first played together in a band named “Renegade” back in 1981, doing covers of Black Sabbath, Judas Priest, and Scorpions.   Derek Peace, Jim Kovach, and I played in a band dating back to 1980.

Correct me if I am wrong but I have noticed a DVD release -available on the Würzburg show-  also in this forthcoming tour. Can you be more specific about this?

Yes, we will be filming the Würzburg performance for a full length DVD, with interviews.  I also hope to have the other shows recorded as well.  But, that is a separate discussion I am open to have with any Greek labels who may be interested.

Have you ever thought to make a special tour dedicated to your second album (One Small Voice)?

I have often thought about that.  The possibility of a special reunion for One Small Voice relies on Steve Benito, or someone who can sing that material well enough to please the expectations.  It is not impossible…  Steve is reluctant to come out of the shadows after all this time, no matter how many times we ask him to reconsider.  😉

So are you willing to work with him again? I thought you did not have the best relationship…

It has been over 20 years since the coup and the court ruling vindicating my position.  I cannot change the past, but I am willing to forgive and move forward in an effort to respect what we accomplished and provide whatever I can to the fans who have shown such amazing support and dedication.  I would welcome playing with the OSV lineup on stage again.  I would hope that Steve has grown to reflect and regret what took place in the same manner that Ray and Derek have.  It would be a great catharsis at this point in our lives.

It has been a request for years around your fan circle. A new album. Shall we keep any high high hopes for a new album with this line up? Or shall it be only for this tour and then silence?

I don’t know if Derek or Ray have the time available in their lives to make that commitment.  But, as long as there is a vocalist, I have always been ready to do the work.

Thanks a lot for your time Terry.

Thank you, Chris.  And, most importantly, THANKS to the fans and friends we will meet again in January! Anyone with a Facebook account can make a friend request at  http://www.facebook.com/terrygorle to chat, find news, and see videos of the band.

March 13, 2019
Hailing from Australia, TEMTRIS recently released their 5th full-length album, "Rapture". They have been part of the Australia metal scene for nearly two decades, and during this whole time they never deviated from their goal which is no other than to deliver metal in its purest form. Fronted by Genevieve Rodda, they surely know how to write music that matters while avoiding the pitfalls and industry gimmicks that wants female-fronted bands to operate in a cookie-cutter fashion. Genevieve was kind enough to share a few words with us about the band, their latest album and the Australian metal scene in general. Enjoy...