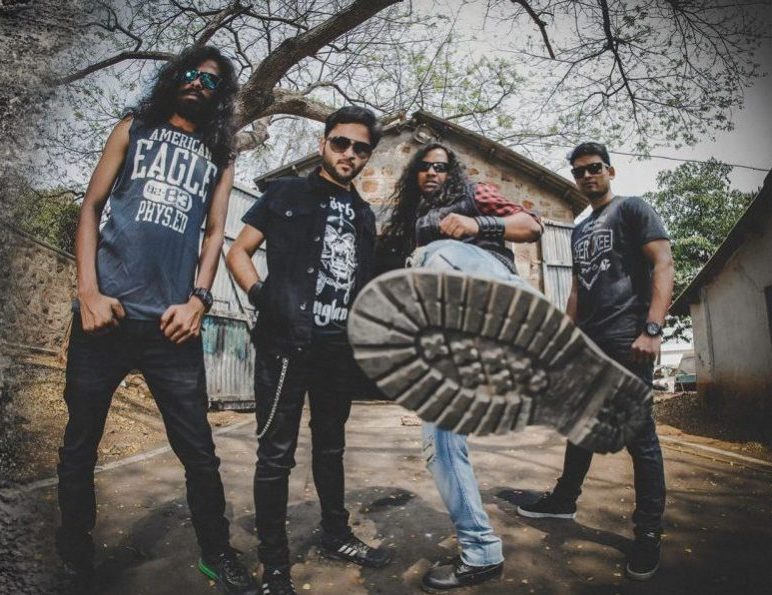 AGAINST EVIL come from a place where Heavy Metal is not the most popular choice. In a country where Bollywood and mainstream media dominate the music industry, there are a few that take things in their own hands and deliver their music by their own means.

Read the AGAINST EVIL – All Hail The King review.

Greetings guys! Thank you for taking the time to chat with me. To kick things off, could you please provide a short bio?

We have been playing together since 2009 in a classic/hard rock cover band called ECHO. In 2014, we decided that it was time to make our own music and formed AGAINST EVIL. In 2015; we released our first single “War Hero” and the rest is history!

How would you describe your music to someone that hasn’t heard of you before? Favourite artists, albums, musicians etc you could use as a reference?

In 2015 you released your first EP, “Fatal Assault”. How was the reception? What has occurred between that and “All Hail The King”?

The reception was amazing! We mostly spent the time between the albums, touring and playing shows all over India and writing new material.

Both “Fatal Assault” and “All Hail The King” covers, feature the band’s members into an adventure of some sort. Is there a story behind this or did you just wanted to remain consistent between releases?

No story or anything like that. We just thought it would be cool for us to be on the album cover. If you don’t have an Eddie or a Snaggletooth, be your own mascot!!!

How do you work as a band when it comes to songwriting? Who is/are responsible for coming up with the music and lyrics? Is there an “agenda” on what goes on the album?

We work individually in the initial stages, mostly on guitar riffs etc and if we think something sounds promising then we try to develop it into a song by adding more riffs, drums. The lyrics come at the end when we’re totally happy with the instrumental version of the song. The songs only go on the album if we are completely satisfied. It’s always a group effort.

Can you please share a few information on the production of “All Hail The King”?

Everything except for the drums and vocals were recorded at our home studio. The album was self-produced and mixed/mastered by Simone Mularoni from Domination Studio, Italy who has also mixed our previous album.

How was the reception so far?

Fantastic! We couldn’t have hoped for a better reception. We are really stoked that people from all over the world have bought the album and are really digging it!

You released the album on your own accord, but are there any plans for signing a deal with a label to handle the distribution/repress of the album on vinyl, more copies etc?

These days it’s very easy to release music on our own. But we are definitely open to working with record labels given the opportunity.

Which were the reasons that led you working with Jeff Loomis, and how was the overall experience like? Which one of his works is your favourite?

We shared the stage with Jeff Loomis as the opening band in 2016 on his maiden tour of India. We got to hang out with him after the show and gave him a copy of our first album “Fatal Assault”. “Sentenced to Death” was one of the first songs that we wrote for the new album and we felt that it needed a totally insane shredding guitar solo to match the fast pace of the song. Jeff Loomis was the first person we could think of. We contacted him and he was totally willing to play the solo and also said that he liked our music a lot. We are very thankful to him for making this happen. We are all huge fans of NEVERMORE and his solo stuff.

What do you think about “new” bands having well-known musicians as guests in their album(s)? There surely is the media attention part, but what else is there for you to gain as an artist/band?

I don’t know about other bands, but it’s a dream come true for us to have someone like Jeff Loomis guest on our album. It’s a great feeling when someone you idolize as your guitar hero plays a solo on a song you wrote!

Which artist would you like to have as a guest in your next album(s)?

That totally depends on the songs that we write for the next album(s)!

India has a small but uprising metal scene. How would you describe things in general? Is there demand for metal music or is it more of niche/underground thing?

Metal music will always be part of the underground scene here in India. The mainstream is dominated by commercial, bollywood music. But there are some pretty kickass metal bands here in India.

How easy is for someone to get into metal in India? I mean, are there record stores selling other than mainstream metal stuff and music studios with equipment suitable for a metal band to record / rehearse?

It’s all digital now so it’s pretty easy for someone to find music since it’s available on many platforms. The record stores mostly sell the mainstream stuff but there are a few distros, labels promoting underground music such as Slaytanic Distro, Transcending Obscurity Records. Also, there are plenty of studios with really good equipment for bands to record, rehearse.

Which other bands would you suggest to someone who wants to know more India’s metal scene? Which genres are the most popular?

Bands such as KRYPTOS, DEMONIC RESURRECTION have been around since over 15 years and are pretty much the flag bearers of Indian Metal. There are also some new bands like CHAOS, AMORPHIA, PRIMITV that are kicking some major ass with their music. I’d say extreme metal is the most popular genre in India.

Would you move abroad for more opportunities as a band or do you see the whole thing as a side activity?

Unfortunately, music (especially metal music) cannot be pursued full time by most people here in India. Everybody has their own day jobs, businesses and I don’t think the situation is any different abroad.

Moving forward, what should we expect from AGAINST EVIL?

Well, we just released a new album last month and have already started performing live shows in the country. But we are always working on something so stay tuned!

If there’s anything you’d like to say, even regardless of AGAINST EVIL/heavy metal music, now is the time…

We would like to thank everyone who has supported us by picking up a copy of our album, coming to our shows or by sharing our music. Cheers and stay METAL!

That’s all on my end guys! Thank you once again for taking the time to chat with me. Best of luck with “All Hail The King” and everything you do!

Thanks a lot man! Cheers!

October 29, 2018
AMULET, heavy metal band from the UK, recently provided an update for their second, yet untitled, upcoming album in a recent interview for the Dissonance...