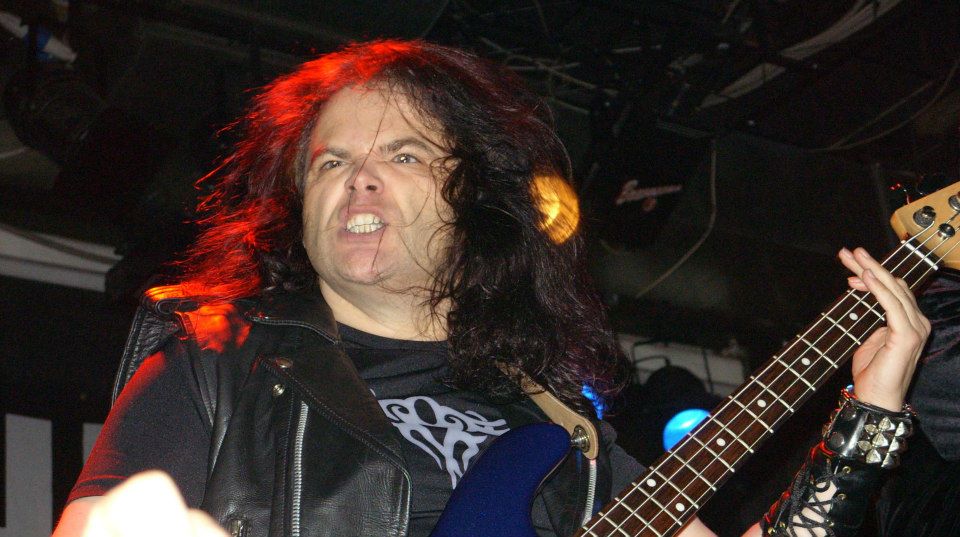 British legends Cloven Hoof, are not only one of the top bands to come out of the N.W.O.B.H.M., but also perhaps the only band of that era to make a killer comeback in the late 80's releasing two killer power metal albums, "Dominator" and "Sultan's Ransom". They are now ready to blow our speakers once again with their upcoming album "Absolute Power". Here to tell us more about it, is mr. Lee Payne, who turned out to be as great a person as he is a musician. Enjoy...

Let’s take it from the top: How did the whole reunion gig come about, what’s the current band line up, and what feedback are you getting at your live appearances so far?

Lee: First of all its great talking to you Petros, I love having the chance to inform the hoof faithful from Greece , that is my spiritual home. When I was a kid I was always hooked on the mythology and tales of battles and heroes. I wanted to visit Athens all my life, because it had inspired me so much. All the Epic parts of CLOVEN HOOF have been influenced by my love of Greece and its legends. Even from the first EP the band has received fanatical letters from Greek metal maniacs, so I couldn’t wait to play for them. On the album after Absolute Power there will be a track called Spartan that I have just written, in honor of the fans at the A1 club in Athens . This song is for them and promoter Greg! Right the reunion! Initially I started recording new hoof songs with ex-guitarist Andy Wood in a studio in his Attic. I have had contractual ties stopping me making music for 10 years. It has been hell, but the minute I was released I wanted to dedicate the rest of my life into making music for the Cloven hoof faithful who supported us no matter what. I have never stopped getting letters from all over the world off fans that wanted a new album. That is why Absolute Power has to be the best ever beyond question. The expectation of them is so high, that I don’t want to ever let them down. This album will totally kill I promise! When I had completed all the demo tracks, I contacted Jon Brown and Russ to see if they still wanted to rock. They asked to hear the new stuff and after hearing it, said they thought it would be the best album yet so count us in. After that I told a few fans that the band is back together by answering their e-mails, and the word spread like wildfire. Gigs were offered to us plus various record deals, so we have been taking time to get the right one to safely secure the recording future of the group Now we have. What can I say about the live reception? Just Awesome! The fans were fanatical and it makes you humble God bless em!

Moving on to the new album, why the name change from Absolute Power Corrupts absolutely to Inquisitor? I thought the first totally kicked ass!

Lee: Funny you should say that, the record label Xzec records have just decided that it should be called Absolute Power after all because it kicks ass lol! Inquisitor is probably the best song we have ever recorded and some people at the label wanted that to be the album name. Personally I don’t care just as long as the whole thing blows the fucking walls down when you play it. I always try to write dramatic songs and titles so they can take their pick

What can we expect musically wise? Will it follow in the technical power vein of Sultans Ransom, or will you delve more into the bands original, new wave era sound?

Lee: A mixture of both. It is a natural progression from Sultan with much heavier sound. The production is amazing with Tom Galley at the helm. I have been trying to get him to produce the band since 1984, now we have the perfect man to get the sound we want. It will be brutal metal, but epic sounding as ever. It is true metal with no nu metal or blues shit overtones. We have never lost our identity and the old fans will love it, hopefully we will get some new ones along the way too.

A thing I’ve always liked about Cloven Hoof, are the inspired and at times poetic lyrics. Can we expect something similar in that department? A concept album perhaps?

Lee: No concept album this time I’m afraid, but in a couple albums time there will be. I am writing for it now. The lyrics on Absolute Power are what you might expect, I will not write any other way, so hope you all like them. Tom Galley has worked with Brian May, Scott Gorham, and Glenn Hughes to name a few. So it is an honour when he says the new album will be the best metal album to come out in 10 years! Good news too for the fans that there will be a hoof album out every year at least for 5 years. No more gaps between release dates thanks to XZEC Records.

In my book Cloven Hoof have already conquered the hilltops of musical creation, with songs like Mistress of the Forest , or Road of Eagles. Do you think that perhaps its time for that artistic level to be translated into sales, or does todays market prohibit such goals?

Lee: Good questions my friend, only time will tell. It is no secret that CLOVEN HOOF want to be the band that turns the clock back and restores true metal back to its former greatness. If all the real heavy metal fans buy the new album en mass, then our sales will set alarm bells ringing at record companies all over the world. For the first time without hype and just word of mouth. Maybe a peoples band can sell enough to make a difference. If we sell then there could be a backlash that will help other new metal bands break through. That is my dearest wish. I would love to spearhead that revival, but we cant do it without the fans. The pirates could destroy this, but the true metal maniacs need to buy the genuine album from XZEC Records. Buy two even and save one for best lol. This is not for financial gain (I dont give too fucks for money or I could of sold out to commercial bollocks a long ago) but a crusade to put metal back on the map, and CLOVEN HOOF need the sales figures to lead that fight. Most of the major label heavy metal acts are too tied up in corporate money gain to help new bands. They dont care for anything, except getting high profile bands to pay big bucks to support them. The music press give good reviews usually to all major label bands no matter how crap they are, because of advertising money. We dont care about that bullshit, if we become huge we would only let unsigned struggling true metal bands support us. And we would treat them with respect too. So buy the new album Absolute Power and ram that metal up their ass!

VOLTZ: “Knight’s Fall” To Be Reissue On Double CD And Vinyl...

September 27, 2018
VOLTZ were formed in the late 70's in Portsmouth, UK and they released only one album in 1982 which is nowadays hailed as one...