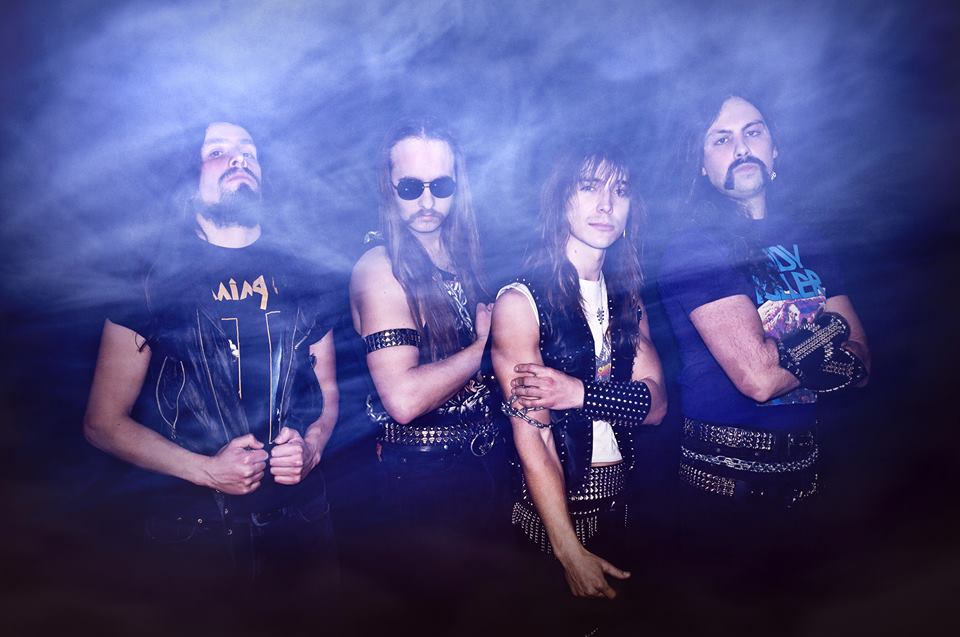 MANACLE is one of these bands that are up to the challenge no matter the cost. "Forged" in Canada, homeland of iconic ANVIL and more recent CAULDRON, the band has recently released it first full-length album. Mr. Inti (guitars) was kind enough to share a bit of his time with us and shed some light on the past, present and future of the band. Ejoy...

Greetings guys! Thanks for taking the time to do this interview. Would you like to start by introducing yourself to our readers?

Hey, thanks for asking the questions! My name is Inti, and I play guitar in Manacle!

How would you describe your music to someone that’s not familiar with the band?

Fast and heavy guitars, high pitched singing, pounding bass and lots of toms! …Maybe I am describing an earache for some!

What’s your main influences and your source of inspiration as a band?

Mostly Judas Priest, Queensryche and the general 80’s power/speed genre, but definitely not limited to only that, or just metal music. Life in general draws a lot of inspiration for me, whatever happens, you can always write a song about it!

Ιt’s been five years since the very first MANACLE release. Did things turned out the way you expected when you started? What’s the biggest challenge you’ve faced so far?

I don’t think things ever turn out how you expect, but I’m not disappointed with where things are now. Biggest challenge so far? Finding a steady drummer! haha

Would you like to provide some insight on producing “No Fear To Persevere”?

It was the end of August 2016, definitely the hottest time of the year, especially in a smoggy Toronto. We scraped together enough money to book a weekend at the Lincoln County Social Club, a local studio recommended to us by our friend Jason Decay (CAULDRON), who had recorded there before. At the time, the line-up was myself, Kevin, Jake and Phil. John Dinsmore was the Engineer, who guided us through our first real studio experience quite casually, alongside being a genuine nice person, I’d say he did a great job capturing our live raw sound. Jason came down to the studio a few times and did some back-ups on the final track “Stand Tall”, a song we almost omitted recording, if it weren’t for his persuasion to record everything. We’d cap off every night at the dive bar conveniently tucked in the next block, called The Jem. Great place.

How did you end up working with Olof Wikstrand (ENFORCER)?

Naturally, through our friendship with Jason and CAULDRON we met the ENFORCER guys and Olof. Olof has a great ear for the sound of metal we are going for, and it really made sense to have him mix the album. I’d say he nailed it!

MANACLE – No Fear to Persevere…

If not mistaken, some of the material on “No Fear To Persevere” was also featured in past demos. How come and you didn’t “officially” release this material earlier?

It was always the intention to release things sooner, but things always happen to get in the way here and there. Now that we have no more demos to grave rob, expect all new songs!

Many bands compose and pick up different material for their official releases, leaving the demo stuff behind. You have selected to include most of the songs from your demo era on your debut. Well this actually means that you really believed in your material right or wrong?

I’d argue that most of a bands demo material will end up on their first album typically. While a lot of the songs are older, the only people who knew the songs before were the locals who had seen us live and picked up the demos. And everyone else now getting into our songs gets the benefit of hearing the songs in their most refined stage (new recordings). In the end I’d say I believe in the material…but I always believe I can do better!

What about the re arrangement of the material from the primitive demo versions to the final album ones? Was it a difficult quest? Was any actual evolution of the songs themselves (for example on their structure) or have you just re recorded and produced them from scratch? Yes, there are people who have not heard the “Rehearsal Tape” or the “Live At Lee’s Place” tapes or perhaps those that would search for differences and similarities, between the “Preview” demo and the debut. This question is for them.

It was mostly an evolution of playing the songs so many times and tweaking subtle changes. There were also aspects of having different musicians from the early demos to the currently material, different drummers play the same song differently, as well as bass players etc… so there was natural style changes in those aspects as well. Going forward I think the album is the law on the structures, but I am always into a little “breaking the law” now and then…

As for “Preview”, it was merely just a preview of what was to come on the album, people took it as a serious demo when in fact it was just a few songs uploaded to bandcamp to promote the upcoming release, which was subsequently delayed many times. Sonically the only difference between “Preview” and the album is the mixing and master…a big difference however!

So can we say that the “Preview” demo was preparing the audience for what was about to follow on the debut release?

Speaking about the two tapes, can you remember the actual copies number of each one of them? I know you were distributing them by mail. Perhaps on your live shows also? All this tape distribution thing, was it a way to express in a better way, what MANACLE is all about – old school Steel – or what?

I got 150 copies pressed of the “Rehearsal Tape” plus some 30+ copies I hand dubbed before, it was really just to get us on the map, that we are a band, Manacle, and we’re gonna try and do something, here’s a shitty demo, check it out. “Live At Lee’s” wasn’t a real demo, it was something we put online and hand dubbed a few copies but not a real release, I thought it sounds kinda bad haha

By mail, shows, trades, records stores, trying to do it the old school way to an extent, but really it’s just “school”. D.I.Y. till death!

How do you work when it comes to songwriting? Are you into improvising/jamming or do you prefer to put more thought into your songs?

I usually have a few ideas to start, but like to jam them out and see where they can go from there. Once there are a few good ideas it starts to build into a song. I pair a lot of riffs with lyrics early on so they evolve together. I try to do as much homework as possible so I feel like I know what I am doing when I come to rehearse, but I’m always interested to see where something can end up.

A band from Canada signed on a Greek label. Who found who? And how is the co operation with No Remorse Records so far?

I believe we had both known of each other before hand, and ended up becoming acquainted when we did some trades. We kept in touch, we even met in person when I came in Greece and I sent them the rough tracks of the album for some feedback, they were very interested in working together and I thought they would be a good fit for us considering their catalogue has many bands in the similar vein to us. I can say I’m quite happy with things so far! Hopefully you’ll see us playing in Greece sometime soon!

What’s the main take away for MANACLE from making this album?

That we indeed have, no fear to persevere!

I have to comment on the length of “No Fear To Persevere”. Don’t you feel that 30 minutes is a bit short for a full-length album? Was there any material left out of this release on purpose?

A worse scenario would be an album that is too long. Originally there was a 7th song for the release but we scrapped it, ideally to rerecord a better version in the future.

Do you think CDs (and digital releases) have affected the quality of a record due to the maximum allowed capacity (eg. allow more fillers)?

For sure! Some albums just seem to drag on, especially the early 90’s when CDs were new and popular and we have 15+ songs on a CD, but how many are not filler? I believe in the “full album experience” vs. “Singles/playlists”.

Are there any plans for promoting “No Fear To Persevere”?

Current plans are an East Coast Canadian Tour in November, and Europe spring 2019! (promoters get in contact). Locally we are supporting BEWITCHER (Speed Metal from Portland) next month, and in the fall, CLOVEN HOOF.

When it comes to you as a listener do you think vinyl and older medium formats play such an important role in order to enjoy a record?

I personally don’t think it matters what format you listen to an album on, you can still enjoy it the same. However it’s much easier to get lost in the magic of playing a record or tape, and being committed to that entire side before, hearing the next, no skipping songs!

What’s your take on the return to the traditional metal sound? Lately, more and more bands are forming up and release music that’s pretty close to what metal used to be during the 80’s. Do you think it’s a trend, nostalgia or something deeper?

There is probably a good mix of all those things, but I think it’s a good thing that heavy metal is on the rise again. Nostalgia is for the old ones, who can teach us the ways if we chose to listen, and we decide if it’s a trend or something deeper…the more people involved in the scene, the deeper the meaning, and there’s more ways to be involved than just playing in a band.

Are you still fans of BLACK DEATH?

Once a fan, always a fan!

If there’s anything you’d like to say, now is the time…

“Lock your doors and keep your parents out
And turn your music up loud!!”

Thank you so much for making this interview possible! I’ll leave the closing remark to MANACLE.

Cheers to you Forgotten Scroll! Closing Remarks: Never give up!

MERCYFUL FATE: Returns for Concerts Throughout Europe in 2020

August 1, 2019
King Diamond shared the following message with his fans: MERCYFUL FATE will be playing an unspecified number of concerts throughout Europe during the summer of...