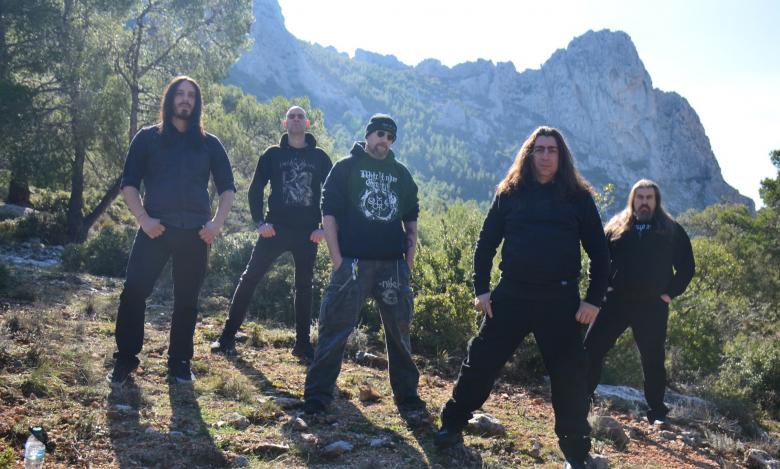 If there’s one band out there that has every right to the Greek Epic Metal throne, that’s definitely BATTLEROAR. We had the chance to chat with band's mastermind and guitarist Kostas Tzortzis about "Codex Epicus", as well as a couple of other interesting topics. Hope you enjoy it...

Greetings guys! Thank you for taking the time to do this interview. So, it’s been four years from the release of “Blood of Legends”. What has happened during this time?

Greetings! Indeed, it has been 4 years since our previous album. We had a major line-up change, mostly because of life changes of the previous members. We did some shows around Europe and we released a split 7″ single along with my good friend Kenny Powell and OMEN!

Let’s talk about a bit “Codex Epicus” and more specifically about the cover artwork and album title. Which was the source of inspiration for these two?

The main idea behind the concept of the cover artwork is that you need to defeat the dragon, to earn a place in the book of epic. It is a symbolic way of saying that you need to do what you must, and try hard if you want to make things happen in life, no matter how hard and unfair a battle may seem.

Can you provide a few technical details for all metal geeks out there? When, where and how was the album recorded?

It took us about five months to record the album, most of which took place at Devasoundz Studios under the guidance of producer Thimios Krikos (INNERWISH). The mixing and mastering process took place there as wel.

When did you start working on the material for “Codex Epicus”? Would you say the recent line-up changes affected in any way the songwriting process?

For the past one year and a half we were working on the new material; almost exclusively. Regarding material, there were some older ideas of mine to use, but most of the new stuff have been composed during the last year. As for the songwriting process and line-up changes, of course every member contributed in its own special way with its style to the finished result and affected the music we made together. That is what bands are for!

Not sure if you’d agree with the following statement, but I think this is the darkest sounding album BATTLEROAR ever made. Do you feel the same way?

Without being absolutely sure, I agree with you…I think it’s by far the most “doom” album than any other album we’ve made and that makes it sounds… dark. However, we did not do it on purpose. It just happened.

Judging by the outcome, I’d say Gerrit Mutz’s voice sounds more fitting in BATTLEROAR’s music than ever. Did the fact you had more time to work together play a role in this?

I believe that since this is the second album with Gerrit, he managed through experience and work to find a way to make his voice fit, even more, to the BATTLEROAR sound and sounds more into it. That’s all.

How do you handle collaboration with Gerrit? Probably the internet helps a lot, but is there anything more than that?

It is mostly through internet as you said. Of course, we try to take advantage of all the time we have when we meet here and there but still, sometimes this is not enough. So, yes, we need to do some extra traveling here and there when its needed.

As you’ve done in the past, you got the mighty “Shark” to participate in this album as well. Your relationship with Mark Shelton (MANILLA ROAD) goes way back. Would you like to share a few words about your collaboration this time?

I am lucky enough to know Mark [Shelton] personally for more than 16 years now. He has been my mentor, my influence and a great friend throughout the years. We share a lot of great moments and memories from all around the world. So, this time, I just needed his help on completing the song he did, cause I was out of ideas, and so he did without a second thought… what can I say more? The rest is history…

This time we get to see the inclusion of clarinet in one of your tunes which reflects on Greek folk songs. How come? Is there a special meaning behind it?

It has to do with my personal homeland and all the tradition, the history and the music that comes from it. It definitely has affected me musically since I was a kid and so I decided to make a song about all these. So, I could not think of such a song without the elements of clarinet or the female polyphonic mourning choir which are the “emblems” of this land in it!

Which are the band’s imminent plans?

Planning some shows from this autumn and on, so we will get in touch with our friends all over Europe.

You’ve been around for about two decades. What has changed and what has remained the same throughout the years?

Things change every day… some for good, some for bad. It has to do with the way people take advantage of the new possibilities… like the internet for example. Too much information and not much time to check everything… and while this happens, the magic of discovering and getting into new music is almost gone. At the same time without it, half of the world of music would not function.

Anyway, I want to believe that the feelings people get from the music they like do not change and this is the most important aspect in music.

As a “senior” of the epic metal scene, are there any new epic metal bands you enjoy listening at the moment?

To be honest I am a bit stuck to some old epic metal stuff. I wish I had the time to check the new bands that come out, more often… so, can not say that I am checking for newcomers while listening to the new PRIMORDIAL album or waiting for example, the new IMMORTAL album.

Lately, an increasing number of bands are forming up to pay homage to the glorious 80’s metal scene. Do you think this New Wave Of Traditional Heavy Metal is a good thing or something that stalls the “evolution” of the metal scene?

Well… first thing that comes to my mind is that I got older, hehe… Anyway, I think we have to separate this scene into bands that want to imitate and copy bands from the 80’s, and bands that make music influenced from the 80’s which is good according to my taste. I hate coping on purpose… there is no music there, no inspiration, nothing… just stealing. So, lets pay attention on each band individually and make our own results.

Why do you think this is happening? Is it a trend, a nostalgia crisis or something deeper?

A bit of everything. It depends on where this comes from and what purpose it serves.

If there’s anything you’d like to mention, now is the time…

Hope our fans will enjoy our new album…

Thank you folks! That’s all on my end. The closing remarks always belong to the guest, so suite yourselves!

I would like to thank you too, as also, all our friends out there who have supported us for all these years! It means so much to us! HAIL!

March 4, 2019
BATTLEROAR, epic metal powerhouse from Greece, announced the departure of Gerrit Mutz, singer of the band for the past 8 years with the band due to...