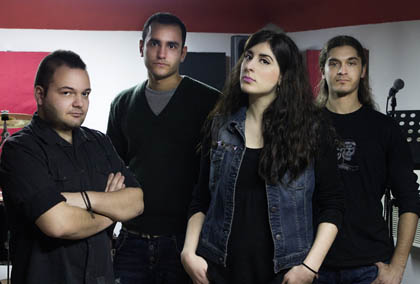 The "Die In The Night" Mini CD by the newcomers Ruthless Steel from Athens, Greece is a great chance for some classic Heavy Metal ala Chastein, Hellion, Grim Reaper and Tokyo Blade to attack your stereo speakers. The band is around almost for a year now and quite quickly they have managed to gather quite a serious vibe around them. However if you still are not aware of this band this interview with Aliki Kostopoulou (vocals) would get you straight into the point.

Ruthless Steel band exploded like a comet on the pure earth. It is almost a year since the very first live show of the band and faster than the speed of light not only you managed to spread your name around the scene but you released your debut Mini CD as well, how you managed to get all this done so fast?

Well…We’ve worked very hard all those months. You know, so many hours in the studio practicing again and again on our songs and covers and paying so much attention to details, so as to make our songs better and better! Just hard work. Then, we had the chance to play with Slough Feg from the USA at Kyttaro Stage, where many people came for the gig. We thought, that was the right moment to start the recording sessions for our EP, as people had an idea of who we are and listened to our songs. That procedure took us two months and finally we released our EP with Iron on Iron Records.

For those that are not aware of the band can you give some basic info? How and when you started, which was your initial line up, do you continue with the same line up?

Ruthless Steel started as a band in March of 2012. The band consists of four members: Aliki Kostopoulou (Vocals), Kostas Papadimitriou (Guitar), Nikos Giorgakis (Bass) and Simos Kalousis (Drums). At the very beginning, there were some line up changes but quite soon, the current members of the band were brought together and so..here we are!

What about the name? How did you came up with it?

We really wanted something old-school. We were actually thinking about it, when the bassist, Nikos, came up with that idea. We wanted to play heavy metal, so we thought, what would be more appropriate?

In your own words how would you describe your music?

Well, our music is the mirror of our souls. We try to express our feelings and thoughts, through our songs. We are really passionate for what we do and it is very important to us, so we hope that people will see that!

What are the influences that you would make as the main ones?

The most typical case for a new band is to release a demo, however you were fast enough to release a Mini CD, how this happened? How you came in touch with Iron On Iron Records? How the co operation with the label is going so far?

We started the recording sessions in September and we had a great co-operation,  but also, support from our good friend and producer, Nikos Papakostas from Entasis Studio. He gave us enough time to do our best each one, individually, so as to have a very good result. Meanwhile, Alexis Vlastos from Iron on Iron Records, got in touch with us and told us that he was interested in our music, so we decided to sign with Iron on Iron Records. Finally, or EP , “Die in the Night” is out, so anyone who is may interested in our music can order a copy! We are very happy to co-operate with those wonderful people and we hope we’ll continue that way!

A female singer to a Metal band, do you think that this is a feature that makes the band a little “different” than the others? I know about the many female fronted bands in Classic Metal scene ok, but there would be some people that would point that females and Metal do not fit. So?

We actually believe that, heavy metal and of course music, generally, is not about the sex of a person. It’s all about their soul. If you really love what you do and it comes from the heart, it’s the same, either you’re a man or a woman.

Being a young band you have very quickly dived inside all this regular stuff that a band would go on: Live shows, release rehearsals and more rehearsals… How all this trip seem to you so far?

As we said before, we are very passionate with what we do, so through all this time we work very hard, but really enjoy it, too! We can’t imagine ourselves without music, so we are very happy when we rehearse or even more, when we perform live.

What are the next steps that the band is preparing? Any info?

What we have to do now, is to continue rehearsing for the upcoming shows. More details, soon!

That was it! Thanks for your time!

SOLOMON KANE – Die By The Sword

January 30, 2021
SOLOMON KANE was a Progressive Hard Rock band from Rapid City, South Dakota, USA (1981-1983). It was formed by members of the midwestern supergroup...