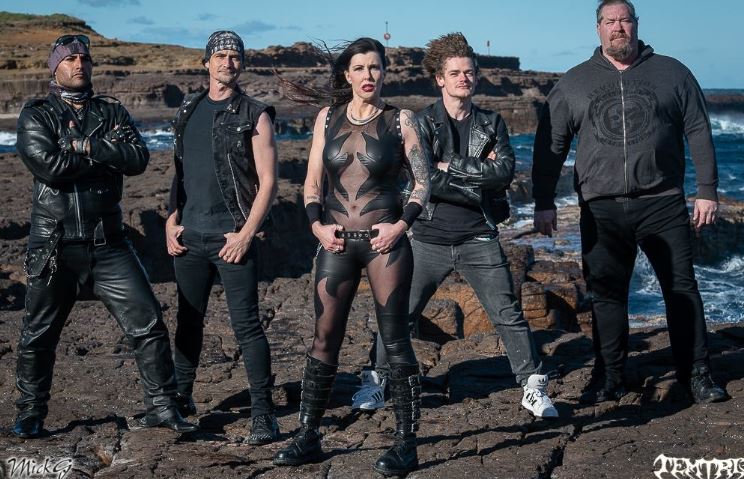 Hailing from Australia, TEMTRIS recently released their 5th full-length album, "Rapture". They have been part of the Australia metal scene for nearly two decades, and during this whole time they never deviated from their goal which is no other than to deliver metal in its purest form. Fronted by Genevieve Rodda, they surely know how to write music that matters while avoiding the pitfalls and industry gimmicks that wants female-fronted bands to operate in a cookie-cutter fashion. Genevieve was kind enough to share a few words with us about the band, their latest album and the Australian metal scene in general. Enjoy...

Greetings and thanks for taking the time to do this interview! Would you like to start with a brief introduction of the band?

Hi and thanks for the interview.. Temtris is a 5 piece metal band from the east coast of Australia. We originally formed in 2000 in Sydney. Not many bands had female fronted singers at the time and we wanted to bring something different to the scene. We were one of the few bands doing clean vocals with death backing vocals. We formed Temtris and started giging on the East coast while recording our first self released album.

How would you describe your music to someone who has never heard of you?

We are Traditional metal band but use any genre in a song we need to convey the emotion. The vocals are mixed styles with traditional with backing death vocals and we have a twin guitar attack with catchy riffs a killer rhythm section to keep things interesting!

Maybe a silly question, but where does your name come from?

We just wanted a female fronted name that had a metal feel to it. Temtris was what everyone thought suited the music.

Moving on to your latest album, “Rapture”, would you like to share a few details about it? It’s your fifth one, right?

Yes, our 5th album and we did a lot of recording in our own studios. Vocals were recorded first at Main Street Studios in Wollongong which is unusual for a band to do, but we made it work. It was mixed and mastered in a few weeks, but we had previously released “Run” as the single and we new that mix worked so we just had the rest of the album mastered to sound like the single which received a lot of love from the metal community.

Not sure if you agree, but compared to your previous releases, I’d say “Rapture” strikes the right balance between power, speed and melody. Maybe a bit less aggressive, yet quite powerful. Where do you attribute this?

We put a lot of time into the writing process before we recorded. We wanted big catchy choruses and riffs that stuck in your head. Our newest member, Youhan AD, who is our drummer, helps bring some fantastic feels to the songs which really made a difference I believe to our sound we have been looking for.

Is everything featured on “Rapture” new material or did you revisit old ideas as well (old demos, etc)?

No, everything is new ideas that get thrown into the songwriting process. If they don’t work we usually scrap them. You tell if something is going to work pretty early. You just get a feel for it.

Who’s mainly responsible for the music, lyrics and overall theme of the songs featured in the album?

Majority of the music is written by Fox (Anthony Roberts) and Hoff (Anthony Hoffman). They throw riffs down and build the music. I will come up with the melody line and lyrics most of the time but Fox does often write complete songs as well. The theme for this album was my own idea as I wanted a positive album and songs about overcoming things in life.

The scene has changed. I think it’s a lot more competitive and I believe this is due to it being smaller. There are less places to play and bands have to work harder to pull the fans in.

What’s the concept behind the album cover?

When I had the song writing idea and themes I thought it would be great to have a person with power running through their veins. We talked to our artist, Darrell Firth, and he sketched out what we talked about and it grew from there.

How can people contact you and how can we get your album overseas?

We have worldwide distribution through Code 7, Hàrt and Battlegod Productions. The album is also available at our website at www.temtris.com plus iTunes. We are always happy to make contact with fans so just shoot us a message on our Facebook page and say hi!

We are doing another video clip from the “Rapture” release. The single will be a follow up from Run. But I won’t give the song name away yet. We have had amazing reviews so if you want to check us out you can listen to us on spotify.

Being active for nearly two decades, I’d guess you’ve witnessed many changes in the metal scene/industry. What has changed and what remains the same for TEMTRIS after all these years?

The scene has changed, I think it’s a lot more competitive and I think this is due to it being smaller. There are less places to play and bands have to work harder to pull the fans in. Album sales are not as big as they use to be due to internet availability of music, but the plus side of that is being able to reach audiences worldwide. But we will continue to release albums as creating music is what we love to do .

Did the numerous line-up changes you’ve undergone in the past affected your growth as a band at all?

Definitely held us back time wise. We really could be up to our 6th or 7th album by now but everytime you lose a member you spend time training people to play sets for shows and the focus or writing and recording has to wait. We do have a fantastic line-up now though with amazing musicians.

What’s the status of the AU metal scene nowadays? Despite some OG bands metalheads are familiar with for some decades now (BLACK MAJESTY, PEGAZUS, etc) are there any other bands you’d suggest to the world to listen to?

We have some amazing bands here in Australia. Bands such as DAMNATIONS DAY, HAZMAT, HIDDEN INTENT are a few amazing bands worth checking out.

I’ve seen you’re already planned a few dates in Australia in support of “Rapture”. Is there a chance for any US/EU dates?

Not at the moment. We have applied for festivals in the US and EU. Hopefully something pops up soon so we can play there.

I believe it’d be fair to say that US/EU metal bands get more exposure compared to bands that come from S. America, Australia or Asia (opportunities, shows, tours, etc). Have you ever considered moving abroad so that you’re able to better support your music?

Yes I have a few times. It is very hard for an Australian band to tour overseas as the costs are huge. But it is a big risk to relocate for music.

One of the key features of your music is the female vocals and despite trends, you stay on the traditional side of things. As a vocalist, which artists would you credit as your main influence?

Yes the thrash/death vocal are very popular as well as the symphonic style with bands these days but my influences are singers such as BRUCE DICKINSON / Geoff Tate and Rob Halford. All amazing vocalists and i take pieces from all of their individual styles to make my own.

Female-fronted metal bands like DORO and LEATHER made quite an impact a couple of decades ago. However, most bands featuring female vocals tend to follow symphonic (NIGHTWISH) or extreme metal stuff (ARCH ENEMY). Why do you think this is happening?

Metal at the moment is about being the heaviest and fastest. So i think that explains the extreme vocal styles. I like listening to a good death metal vocalist. The symphonic metal style i struggle to enjoy. I like my metal with a bit of grit so the operatic vocals don’t work for me. The European metal scene loves them but i am not sure why .

Are there any female-fronted metal bands you think deserve more attention at the moment?

With the exception of your debut, all of your albums have been released through Battlegods Productions. Would you like to tell us a bit about your relationship with the label?

Peter from Battlegod Productions has supported TEMTRIS with every release.  We have a family relationship with him and his company. Battlegod Productions gives us distribution worldwide and the ability to advertise in magazines such as Legacy Mag and many other publications. We have worked together for many years .

What should a metal band/artist expect from the music industry professionals (labels, promoters, etc.) nowadays?

I think a band sets their own standards. As you grow so do your expectations. There are many levels to work on and it’s up to the band to decide what the goals are then reach out to the right people to help make that happen.

With bands like QUEENSRYCHE or CONCEPTION having to raise money (pledgemusic.com) to make a record, I think it’s safe to assume that the industry is not at its best. At least not for metal acts. When do you think things started to go wrong and why?

Definitely the internet availability of music has made an impact. Cd sales are down and the value of music sadly is declining. I am not sure if this will change in the future. But as a musician I hope things improve.

On the same subject, what’s your view on using platforms like IndieGoGo or PledgeMusic to raise money for funding a musical project?

TEMTRIS is old school and has always played our own way with releases and touring. If bands want to go down that road that is their personal choice.

I know it’s probably too soon to ask, but do you have any plans for a new album?

Not yet. We may just release a new song . No decisions have been made yet.

That’s all on my end. Thanks once again for taking the time to do this one! The closing remarks are on you. Cheers!

Thanks so much. Horns up from the TEMTRIS crew. Hope to see you at a show soon 🤘

October 20, 2021
MORGUL BLADE comes from the United States, specifically from Philadelphia, and Fell Sorcery Abounds is the first full-length album of the band, following the...

TOWER – Shock to the System