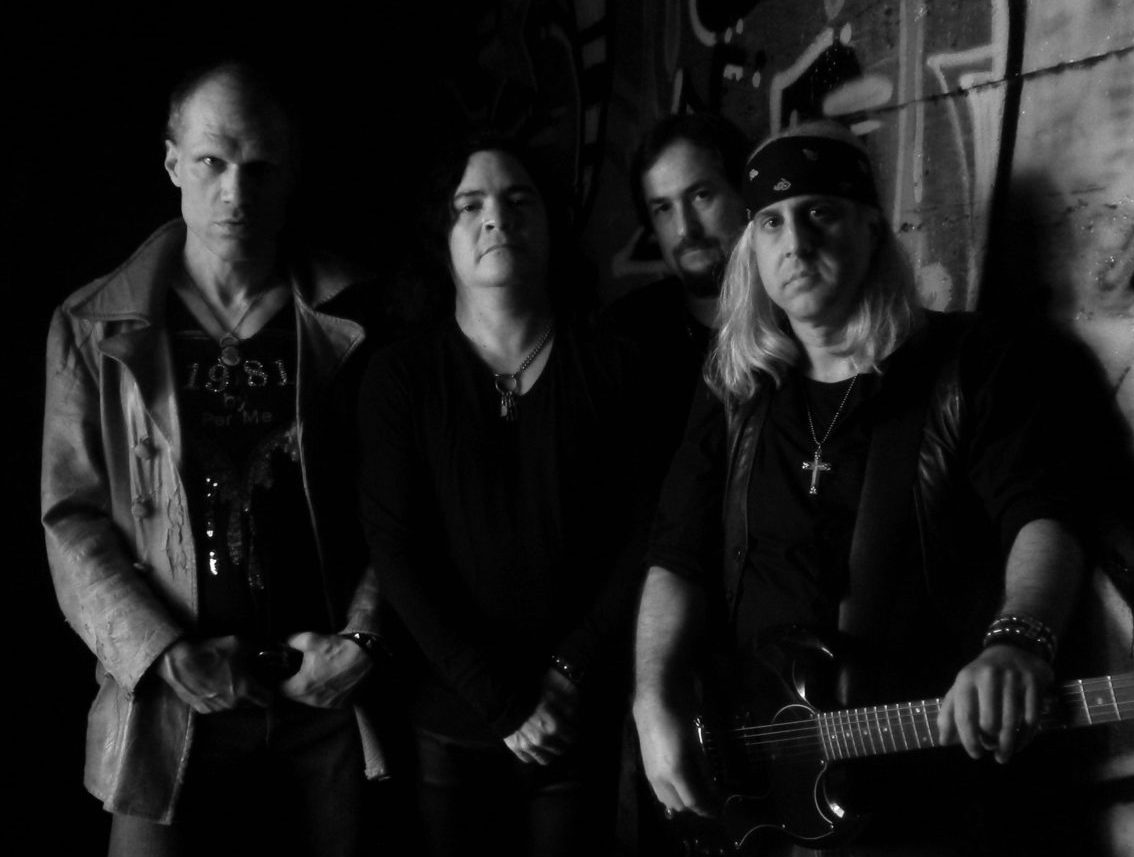 Such was the approach for SLOUGH FEG’s long-awaited tenth studio album, “New Organon”, which will see the light of day via Cruz Del Sur Music on June 14 in European territories and June 21 in North America. “New Organon” also marks the recording debut of drummer Jeff Griffin (who split studio duties with John Dust) and joins Scalzi and longtime members Angelo Tringali (guitar) and Adrian Maestas (bass).

“New Organon” is another definitive statement from one of America’s most enduring and unique true metal bands, whose penchant for THIN LIZZY-inspired guitar harmonies and Scalzi’s timeless storytelling has turned albums such as 2005’s “Atavism”, 2007’s “Hardworlder” and 2010’s “The Animal Spirits” into proto-metal bedrocks.

Since the release of 2014’s “Digital Resistance”, SLOUGH FEG did three touring jaunts through Europe in addition to some shorter American runs, not to mention the release of the “New Organon” seven-inch, which was issued last year. Scalzi freely admits that real life has gotten in the way of SLOUGH FEG making a new LP. That, and his desire to make sure the band still sounds fresh after nine studio albums. “A lot of stuff ended up on the cutting room floor,” he says. “There were some songs we tried to work out for months but ended up dropping because they bored us. We have to be excited about new songs or there’s no point in recording them. We dropped several songs I came up with and some that the other guys came up with, too. It’s tough, but sometimes you have to be honest with yourself and the people in your band and move on when an idea is not working. So, we came up with a lot of song ideas and only kept the ones that sounded exciting for months.”

In true SLOUGH FEG tradition, there is a strong theme running throughout “New Organon”, which was inspired by the 1620 book published by Francis Bacon of the same name. “It presents a new version of the scientific method, as originally presented by Aristotle 2,000 years earlier,” notes Scalzi, who is also a philosophy professor at a college in California. “According to Bacon and others, the science method had remained stagnant for this long period, through the middle ages and renaissance, and needed a refresher. ‘Organon’ refers to a scientific ‘instrument’ or more literally, ‘organ.’ So, it represents a new method for scientific revolution. The songs are all basically about philosophy—from my lecture notes! It starts out talking about primitive tribal society like shamanism as the first philosophers and then proceeds though the pre-Socratics era and then Plato, Aristotle, medieval catholic theology, enlightenment and then existentialist philosophy — mostly in chronological order.”

Fans of the band’s early output when they went under the extended name of THE LORD WEIRD SLOUGH FEG will no doubt be enthused for what’s in store on “New Organon”. The album has a more natural, if not “rustic” feel to it, recalling the band’s halcyon “Twilight Of The Idols” and “Down Among The Deadmen” era. “Very simply, the songs are more heavy, rough and produced rawer than the last album or two,” says Scalzi. “The themes are not about technology, but about ancient philosophy and science. It’s just more metal, but in a very primitive way — but that’s sort of our specialty anyway.”

Around the release date of “New Organon”, SLOUGH FEG will be trekking across the United States with labelmates SANHEDRIN. “We’ll be doing ten shows on the east coast in late May/early June, right about the time when the album comes out, including New York, Boston, Baltimore and Pittsburgh,” says Scalzi. “In early August, SANHEDRIN is going to come out we’ll do another run with them up and down the west coast.”

1. Headhunter
2. Discourse on Equality
3. The Apology
4. Being and Nothingness
5. New Organon
6. Sword of Machiavelli
7. Uncanny
8. Coming of Age in the Milky Way
9. Exegesis/Tragic Hooligan
10. The Cynic

June 27, 2018
BRAVERIDE, epic/heavy metal band from Greece, announced they signed a deal with Heathen Tribe Records which will release the band's second full-length album in fall...